The MUN programme simulates the activities of the real United Nations Organization and aims to build up the confidence and enhance the debate skills of all the participants. This year’s conference was well-attended with the ever growing number of international schools taking part. Acknowledging this, the theme of the conference was “Building Leadership for Tomorrow”. As our delegates and ambassadors were representing their countries, most of the time was spent editing and improving their arguments and talking to delegates and advisors. This year 76 schools from 12 countries were in attendance and with them they brought differences in opinions and cultures along with new ideas and skills. We could not have been more excited to continue the unparalleled level of substantive excellence that MSMUN is renowned for at the 26th annual session.

While most of our time during the conference week was spent preparing for the next day and keeping up to date with homework and projects, as advisors we also had opportunities to be active with students but simultaneously give them time to relax so that they could deal with the intellectual debate and make the most of this life changing experience. Our human rights and health resolutions were debated very intelligently and were passed at the conference. So a very well done to our students.

We were all very inspired by the UN Director General, Zainab Bangura as a guest speaker. She gave us an informative talk on Global Leadership tackling issues such as accelerated action to end violence against women and girls especially in Africa. Although MUN can be undeniably very tiring and difficult at times our students did ultimately enjoy it and found great satisfaction in all their efforts. Meeting others who were truly passionate about world issues was inspiring and made us think about how global effort to make the world a better place has to be the way forward.

“MUN was a great experience for me. Everybody enjoyed the conference, and the speakers were

fascinating and inspiring. They said many interesting things which have stayed in my mind: “you are

an adult even now”, “success is an illusion”, “chase Billy’s eyelash”, “if you want to go fast go alone,

but if you want to go far, go together”.

I made many friends there and it was a fun experience for me. I must admit though, at the closing

ceremony, after we watched the video, it was very emotional. We really had achieved a lot in that

week as delegates and managed to put our point across well representing our countries.”

“It was my first time in at the UN building in Nairobi, I just thought to myself this is truly impressive. I was already nervous from the whole week before we left so I was not sure what to expect. Since we were all there together, I felt at ease that we could all support each other and discuss our ideas especially strategies during the lobbying process.

On our first day at the MUN conference all the rules and regulations were explained which helped reinforce everything we had learned in our MUN club already at school. This meant no one could get clipped or marked on the day much to everyone’s relief!

We were excited and a little apprehensive that our resolution was going to be the second resolution of the day. There were hundreds of delegates in the room, it was nerve wracking. As we attended more meetings, I felt my confidence growing and that MUN was not as stressful as I had thought. On the last day, the director general, a lady originally from Sierra Leone came as a distinguished guest and we all had to stand up and give her an ovation. She spoke very well and it brought to light that if we work together globally we can fight many things and make the world a better place. All in all my MUN experience was a very memorable experience.”

“The MUN conference was a very worthwhile educational trip for me. It gave me a real sense of how it would be to work in this high powered place. The rules are so strict at the Model United Nations it made me feel like I was in an actual UN conference. Also watching how the Year 7 and 8s had learned so much made me so happy because it meant all our weeks of hard work during our MUN club had come to fruition. There were many impressive resolutions debated including ours so it really helped to open our minds. Once again I had made many friends and met old ones from the year before which was a very nice feeling. Spending time out of the conference also made me bond with the Year 7 and 8s. Unfortunately, this would be my last year in MSMUN so I do feel a little melancholy but I am pleased to say it has ended well.”

“I loved being part of MUN as it taught me how to debate and it also taught me to be confident. The chairs at the UN in Nairobi inspired everyone to be confident and it really helped my interpersonal skills. I loved meeting new people from other countries and getting to know them. When I first entered the conference hall, I was so nervous that my palms were wet and I was pacing up and down for a bit! It was amazing how all of that vanished as I got engrossed into the conference. My favourite part of the first day was when I heard my country’s resolution pass, it was a proud moment. Then we got to debate and listen to different problems around the world such as: climate change, destruction of nature, religious conflicts, government accountability and transparency, corruption, large scale conflicts or wars, poverty etc. I would love to go back again and further improve my debating and questioning skills.”

“Our trip to MUN was very successful and I had the honour as the ambassador of Mozambique to read out our health resolution. At first I was very scared and quite nervous. I kept thinking what if they ask me questions about my resolution I cannot answer? Or what if the arguments against my resolution are strong how will I defend it? To my surprise as I stood up at the podium my confidence grew and our resolution passed so I was extremely happy. I am so glad our trip to the UN as the MUN club was successful.” 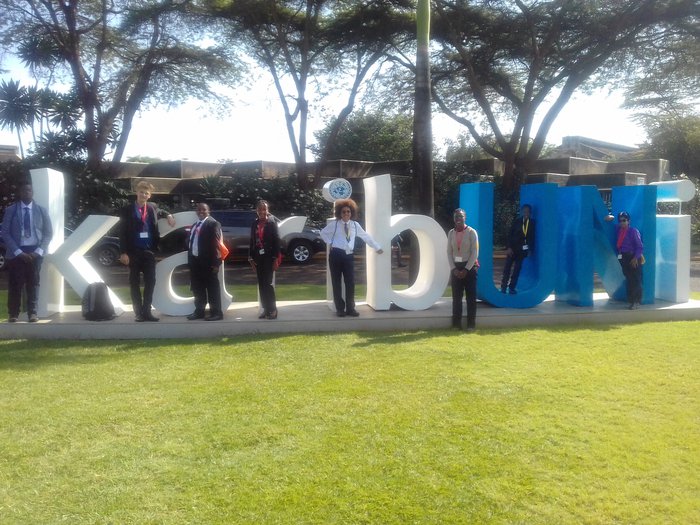 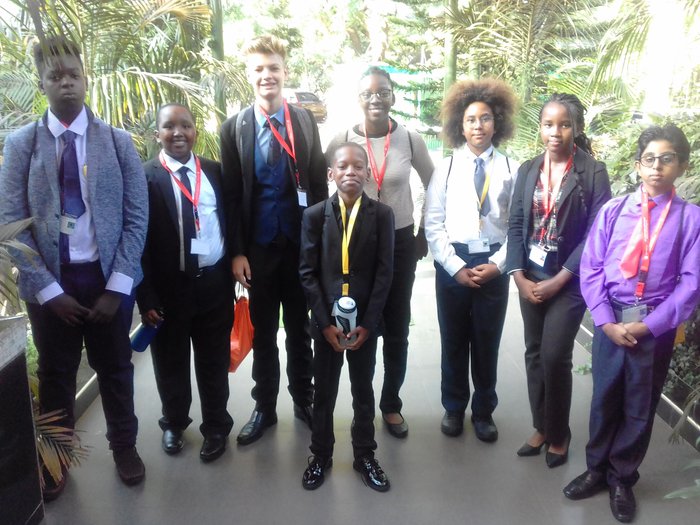 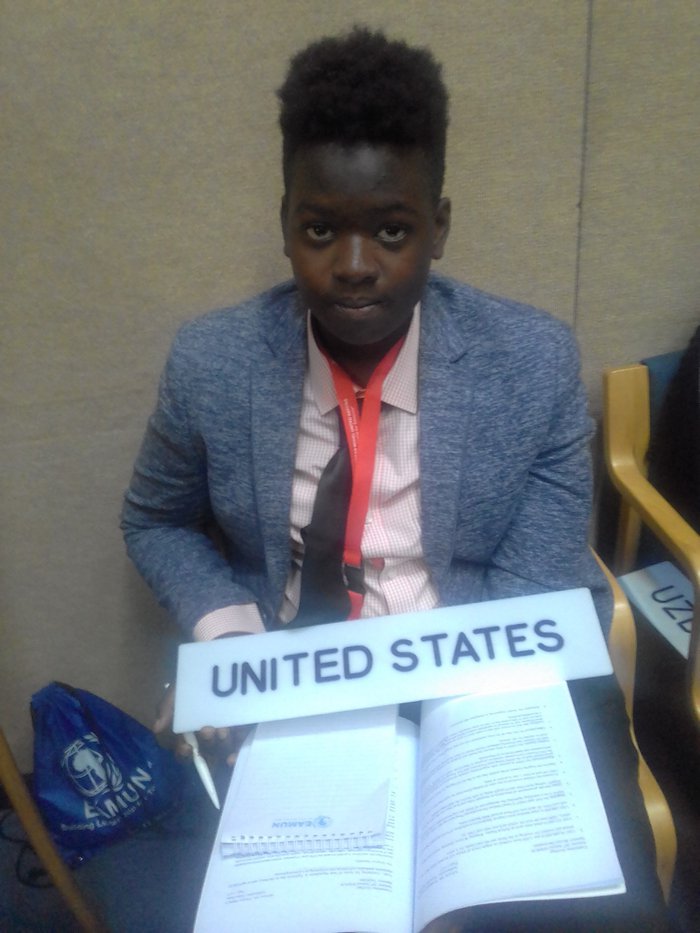 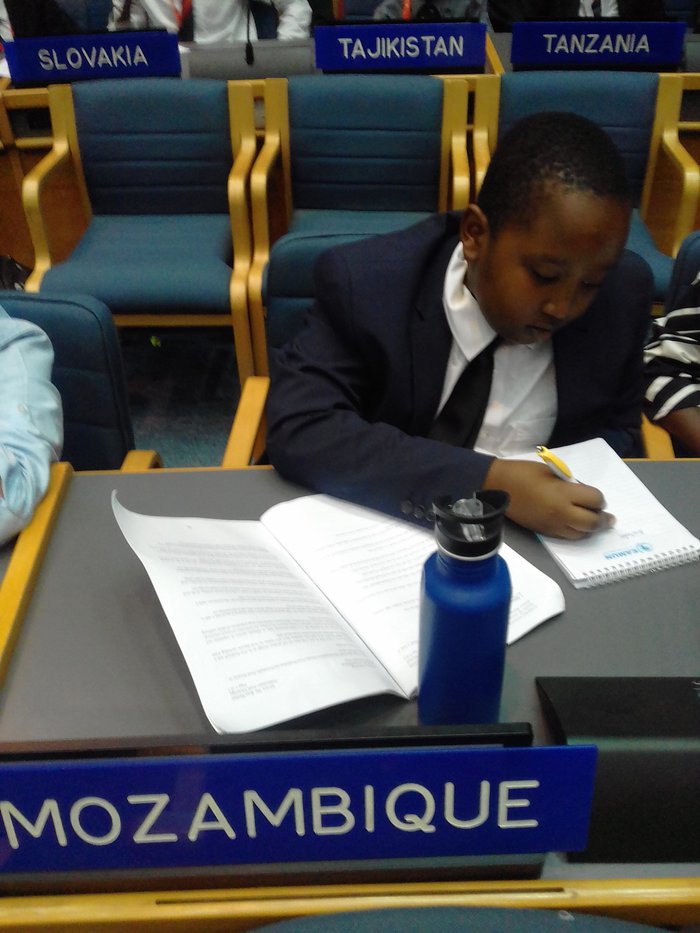 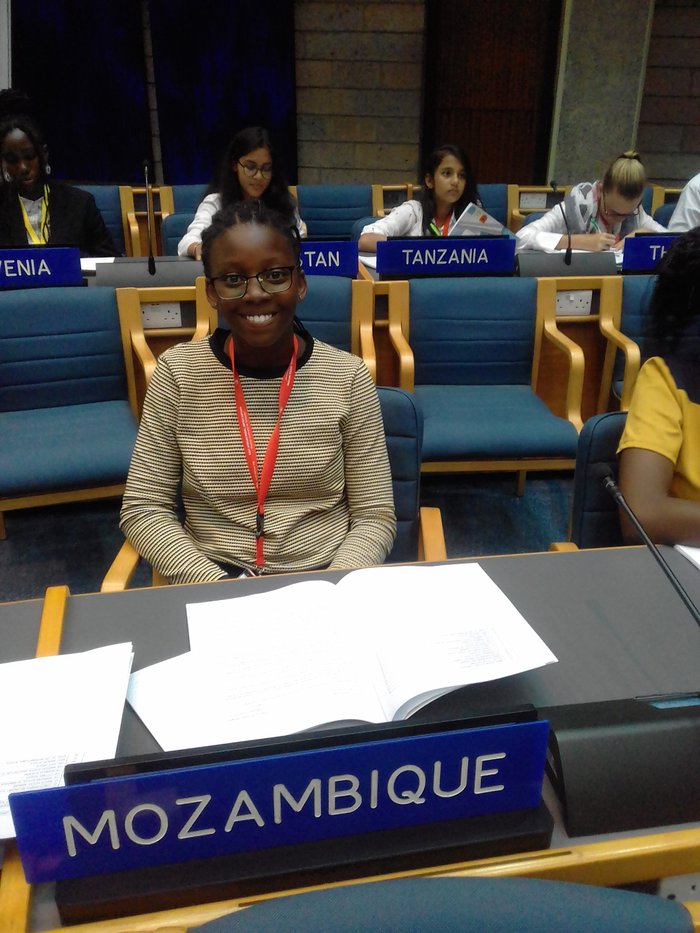 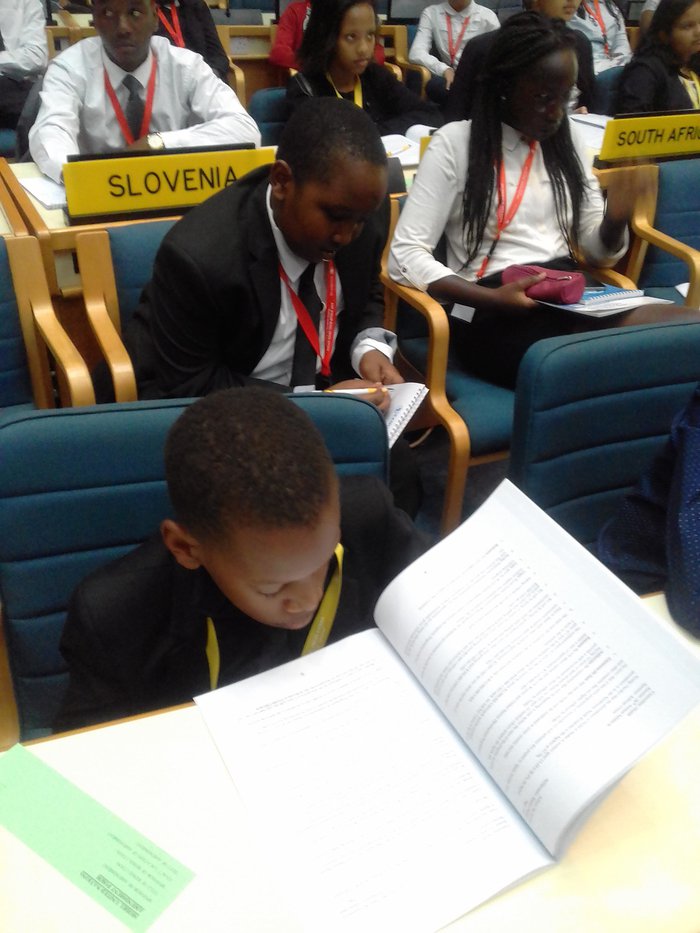 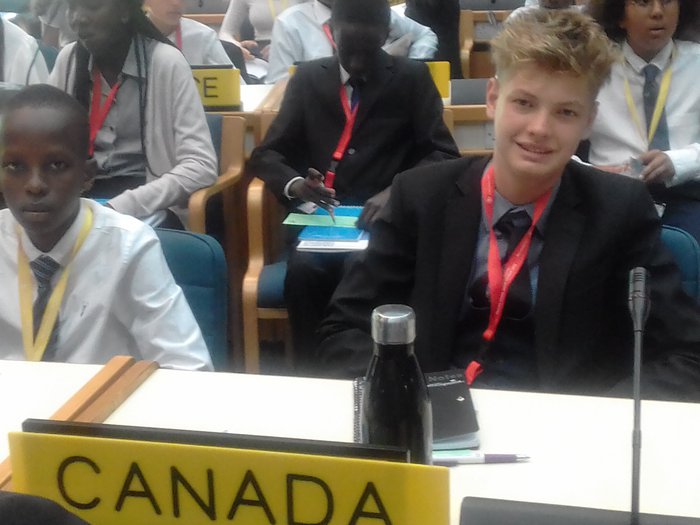